One of the masterpieces of the Armenian architectural genius, the church of St. Hripsimeh is a sacred place for the ArmenianApostolicChurch.

The name of Hripsimeh takes us back to a legend. In the earliest stages of diffusion of Christianity, 36 Christian virgins fled to Armenia to find a sanctuary from the Roman Emperor Diocletian. 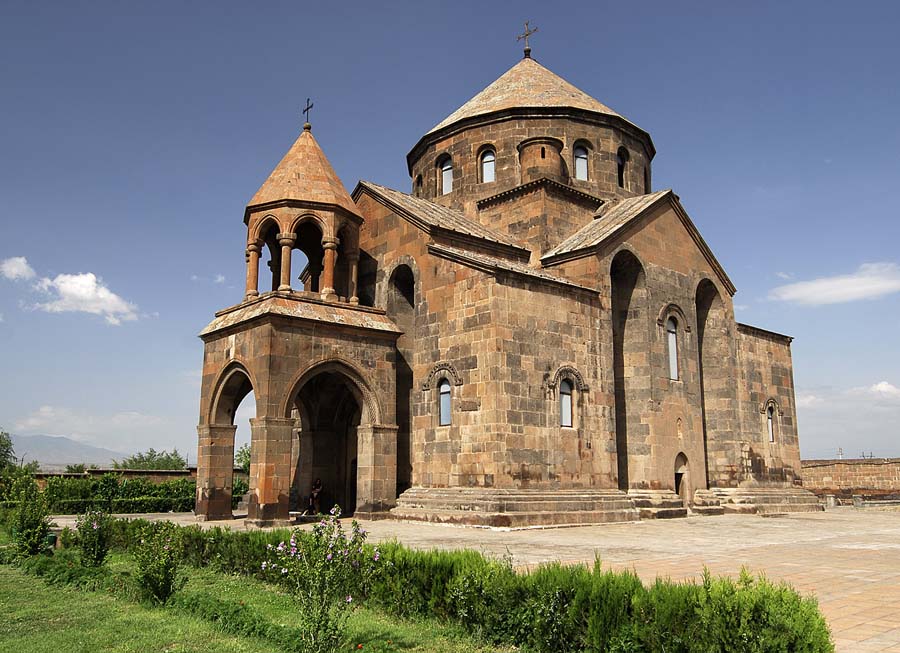 The Emperor dispatches a letter to the Armenian King Terdat III

that read: “There are 36 of them. Their leader is Gayaneh, but the most beautiful among them is Hripsimeh. You can take her as your wife”. At the sight of Hripsimeh’s beauty, the king decides he should marry her, but the Christian virgin does not wish to become a wife to a pagan king. Beside himself with fury, Terdat III releases an order to torture Hripsimeh and her virgin friends until death. On Hripsimeh’s grave a small chapel is later built and in 618 Komitas Catholicos builds this beautiful church, one of the most vivid exemplars of the Armenian architecture. Hripsimeh’s remains rest in the crypt below the main altar.

The Church of St Hripsimeh represents the perfect example of cruciform plan and central cupola. Its dominant feature is the basic harmony of layout and proportions, as well as the simplicity and classical purity of its facades, the outstanding qualities of the Armenian architecture of the high Middle Ages. Apart from the addition of a bell tower in the 17th century, the monument has undergone no fundamental transformation.

The distinctive features of the Church of St Gayaneh are its slender and delicate proportions. A dome and ceilings were rebuilt in the 17th century, when a spacious arched portico was built along the western facade as the burial place for the most senior Armenian clergy.