The monastery of Geghard contains a number of churches and tombs, most of them cut into the rock, which illustrate the very peak of Armenian medieval architecture. The complex of medieval buildings is set into a landscape of great natural beauty, surrounded by towering cliffs at the entrance to the Azat Valley.

The Geghard complex is an exceptionally complete and well-preserved example of a medieval Armenian monastic foundation in a remote area of great natural beauty at the head of the Azat valley, surrounded by towering cliffs. It contains a number of churches and tombs, most of them cut into the rock, which illustrate the very peak of Armenian medieval architecture and decorative art, with many innovatory features that had a profound influence on subsequent developments in the region. It was founded in the 4th century, according to tradition by St Gregory the Illuminator. The first monastery was destroyed by Arabs in the 9th century, but it was flourishing again by the 13th century. The monastery was famous because of the relics that it housed, the most celebrated the spear that wounded Christ on the Cross. Relics of the Apostles Andrew and John were donated in the 12th century and pious visitors made numerous grants of land, money, manuscripts and so on over the succeeding centuries.

The most ancient part of the monastery complex of Haghpat is the small Chapel of St Gregory, lying to the east of and outside the main group. It is excavated directly into the rock of the mountainside and is uncompleted. The earliest of the inscriptions on the external wall is from 1177. The ornate decoration of crosses on the facade extends from the built wall on to the rock-face below.

Built according to an inscription in 1215, the Kathoghikè (main church) is in the classic Armenian form, an equal-armed cross inscribed in a square in plan and covered with a dome on a square base. It is linked with the base by vaulting. The east arm of the cross terminates in an apse, the remainder being square. In the corners there are small barrel-vaulted two-storey chapels. On the internal walls there are many inscriptions recording donations. The masonry of the external walls is particularly finely finished and fitted. A gavit (entrance hall) links it with the first rock-cut church.

As is customary in medieval Armenian architecture, the structure of this building reproduces that of the peasant hut, in which four massive free-standing columns in the centre support a roof of wooden beams with a hole in the centre to admit light. The ecclesiastical version, in stone, is an imposing structure. The peripheral spaces resulting from the location of the columns are variously roofed, while the central space is crowned by a dome with stalactites, the most perfect example of this technique anywhere in Armenia. The gavit was used for teaching and meetings, and for receiving pilgrims and visitors.

The first rock-cut church was built before 1250, entirely dug into the rock and on an equal-armed cruciform plan. To the east a roughly square chamber cut into the rock was one of the princely tombs (zamatoun ) of the Proshyan dynasty. This gives access to the second rock-cut church built in 1283. The second zamatoun , reached by an external staircase, contains the tombs of the princes Merik and Grigor. The monastery complex was encircled by a defensive wall in the 12th to 13th centuries. Most of the monks lived in cells excavated into the rock-face outside the main enceinte, which have been preserved, along with some simple oratories.

The monastery is situated at the head of the Azat valley, surrounded by towering cliffs. It was founded in the 4th century, according to tradition by St Gregory the Illuminator. The site is that of a spring arising in a cave which had been sacred in pre-Christian times, hence one of the names by which it was known, Ayvirank (the Monastery of the Cave).

The first monastery was destroyed by Arabs in the 9th century, but it was re-established and was flourishing again by the 13th century under the patronage of the Proshyan princes, who are buried there. They provided it with an irrigation system in 1200, as well as paying for the erection and reconstruction of most of the churches in the complex. At this time it was also known as the Monastery of the Seven Churches and the Monastery of the Forty Altars.

The monastery was more famous because of the relics that it housed. The most celebrated of these was the spear which had wounded Christ on the Cross, allegedly brought there by the Apostle Thaddeus, from which comes its present name, Geghardavank (the Monastery of the Spear), first recorded in a document of 1250. This made it a popular place of pilgrimage for Armenian Christians over many centuries. Relics of the Apostles Andrew and John were donated in the 12th century, and pious visitors made numerous grants of land, money, manuscripts, etc over the succeeding centuries. 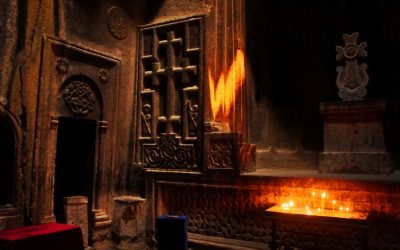 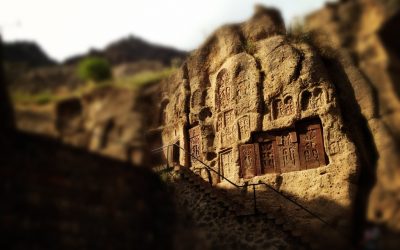 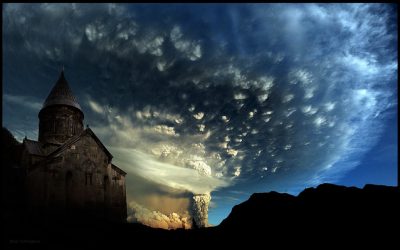 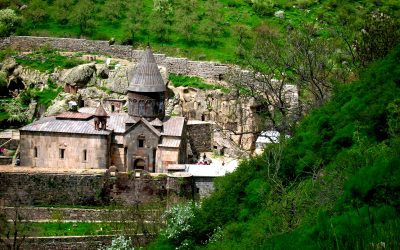 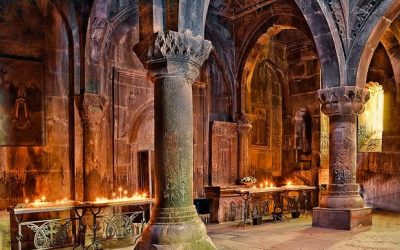 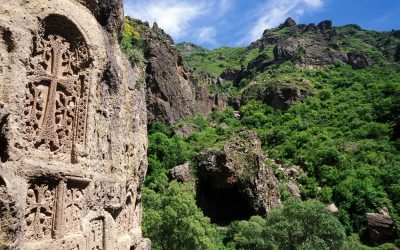 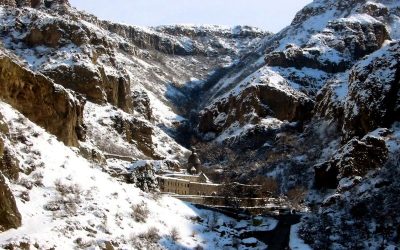 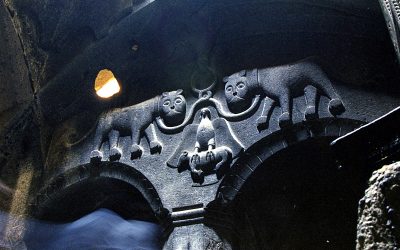 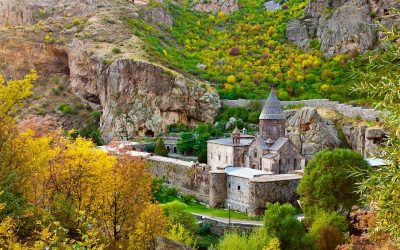 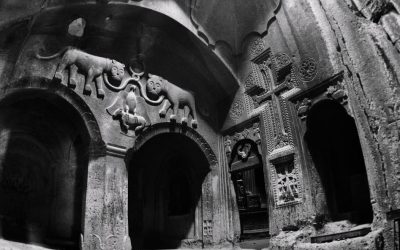 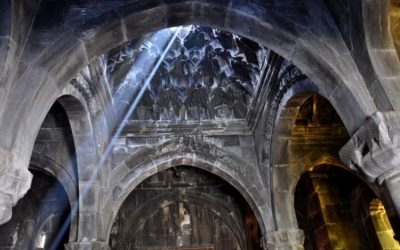 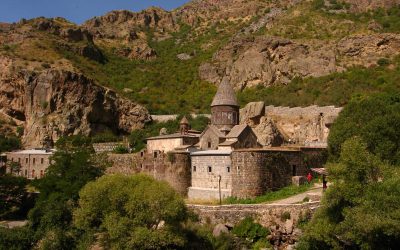 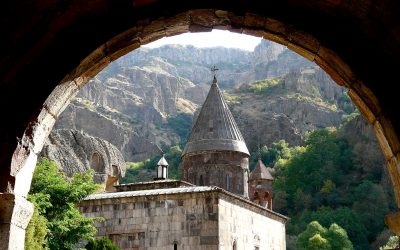